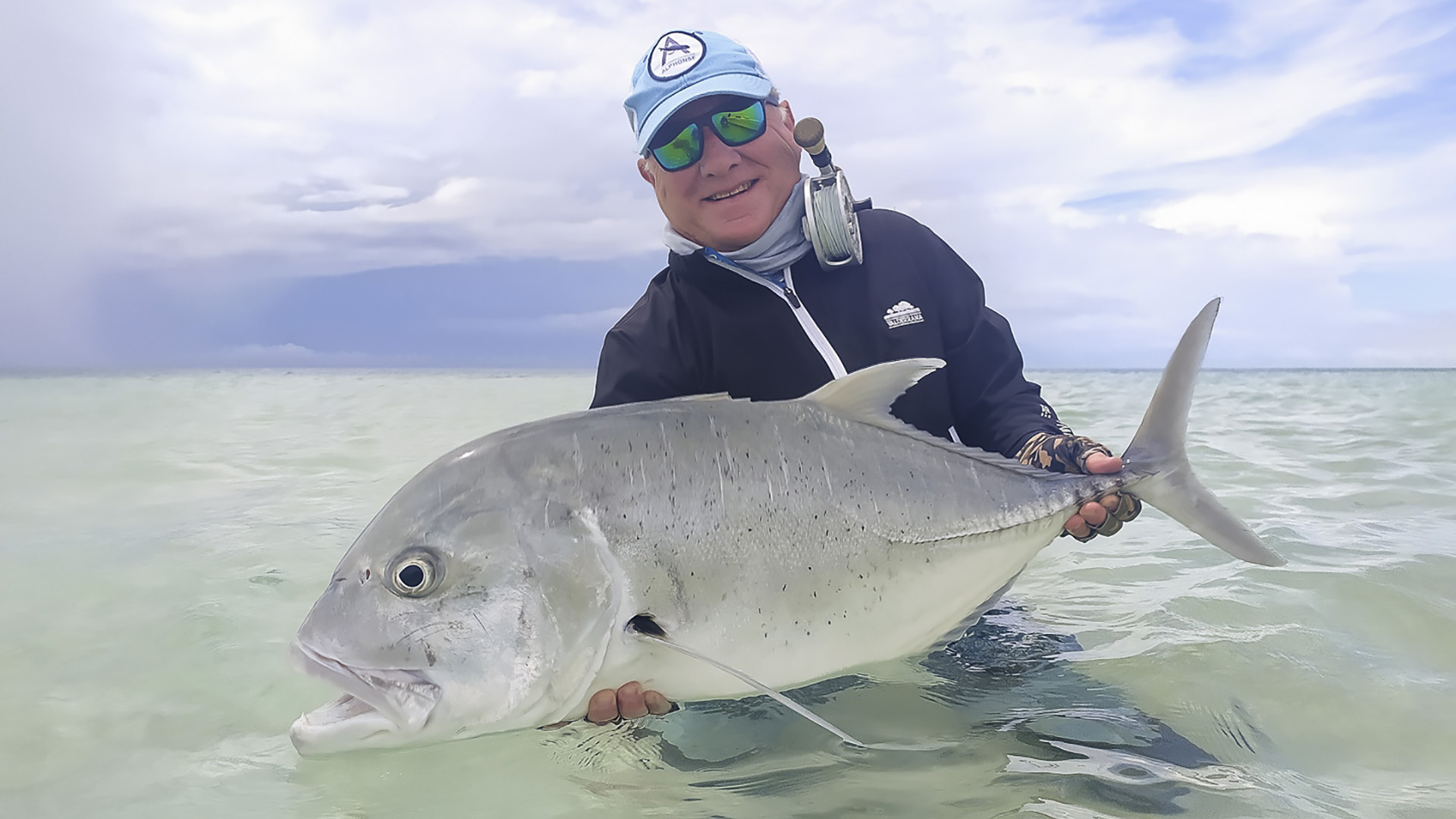 It has been a brilliant start to the season on Alphonse and St Francois Atoll. From day one anglers have been treated to fantastic sightings of fish and once in a lifetime catches. During week seven anglers fished a neap tide just before the full moon which made conditions exciting and the fishing interesting.

During week seven we were joined by Mr Grant Rumbles. Grant is a return guest to Alphonse. After spending three weeks on Alphonse, Grant managed to break the Alphonse diving record, having completed the most dives a guest has ever done in one consecutive stay. Grant also decided to try his hand at fly fishing for the first time. Grant managed to land 20 bonefish on his first day on the flats, having never touched a fly rod before that is an enormous achievement. The bug obviously bit and Grant was on the flats fishing for bonefish the very next morning followed by a blue water expedition for pelagic species that afternoon.

During the bluewater session, two very angry sailfish came up to attack the teasers. Grant unleashed his bright blue sailfish popper and got to work. The fish took the popper in one fell swoop. Grant almost got his Bills and Bones slam badge that afternoon. Grant set the hook on that sailfish and held on so tight that the line snapped and the fish got away. Grant enjoyed fly fishing with us so much that he is now buying his very own Shilton reels and rods in preparation for his next trip to Alphonse.

Mrs Sue Barnes joined Grant on the flats on Friday morning she also tried her hand at fly fishing on the flats for the first time and managed to land her first bonefish followed by five very nice sized fish. We were also joined by a very romantic couple this week, Mr and Mrs Hellec who took part in all the wonderful activities offered on Alphonse. They also tried their hand at fly fishing on the flats and both landed their first bonefish.

The Barnes and Powter families, two legendary return families, joined us for the week and then head onto Cosmoledo for a week. Greg and David fished hard over the week while causing havoc at the bar in the evenings. Over the week Greg and David managed to land a huge amount of bonefish on the flats. Both anglers were able to spot plenty of permit and made lots of shots at GTs. On day five David managed to land a beautiful 85 cm GT guided by our veteran guide Yousuf Shaik.

On day six Greg and David were out on a bluewater trip with Grant and a pack of massive GTs suddenly attacked the teasers. The GTs were so big that the guides thought they were tuna. Chaos erupted on the boat and Greg released his popper, a smaller 75 cm GT took the popper and put up a good fight. Greg managed to land the fish. The GT was measured and tagged for research purposes, it will be interesting to see if that fish ends up on the flats. On day six Chantal Chone landed a nicely sized 64 cm GT. This was Chantal’s last day on the flats before heading over to Cosmoledo for another week of fishing. 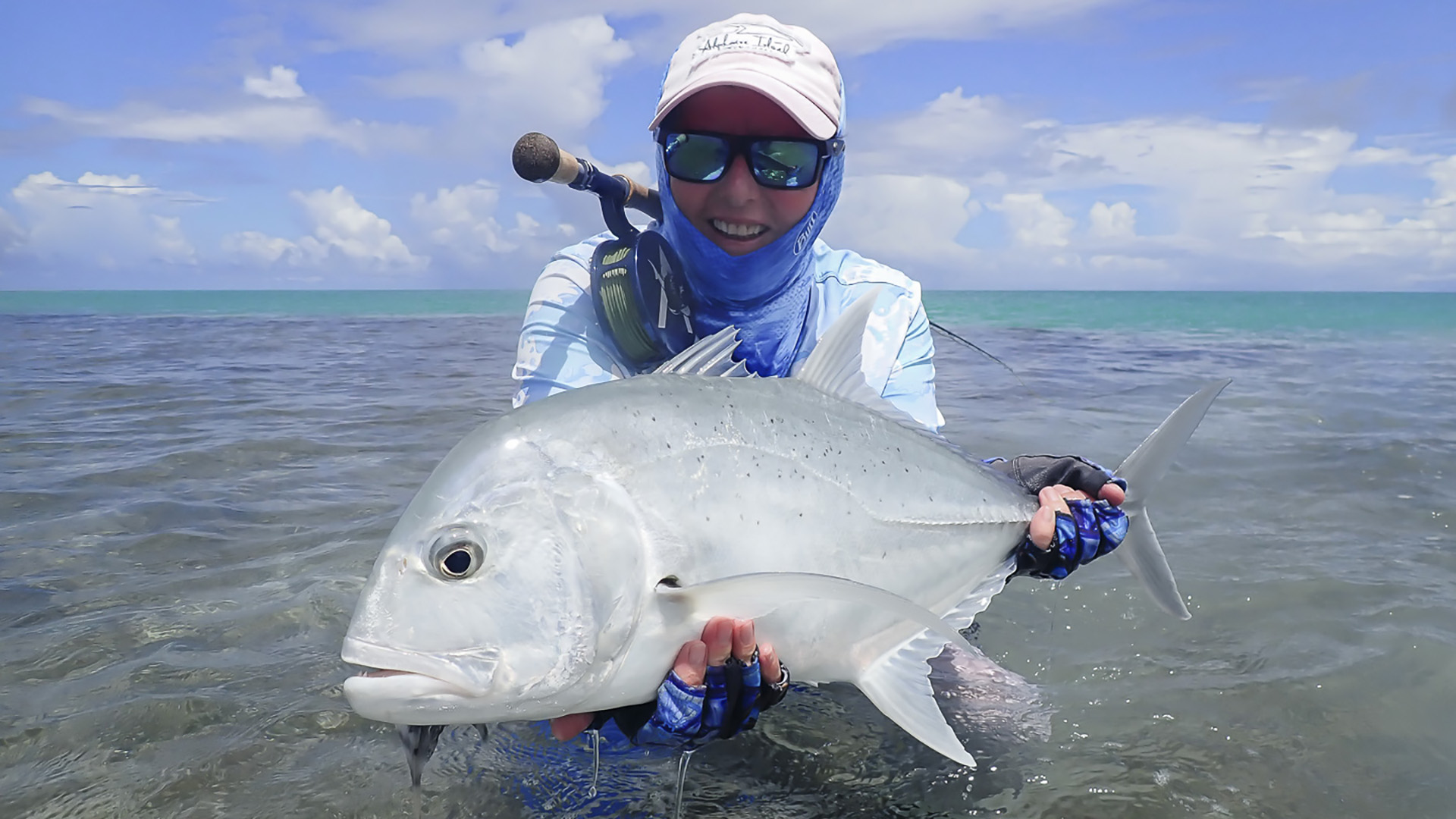 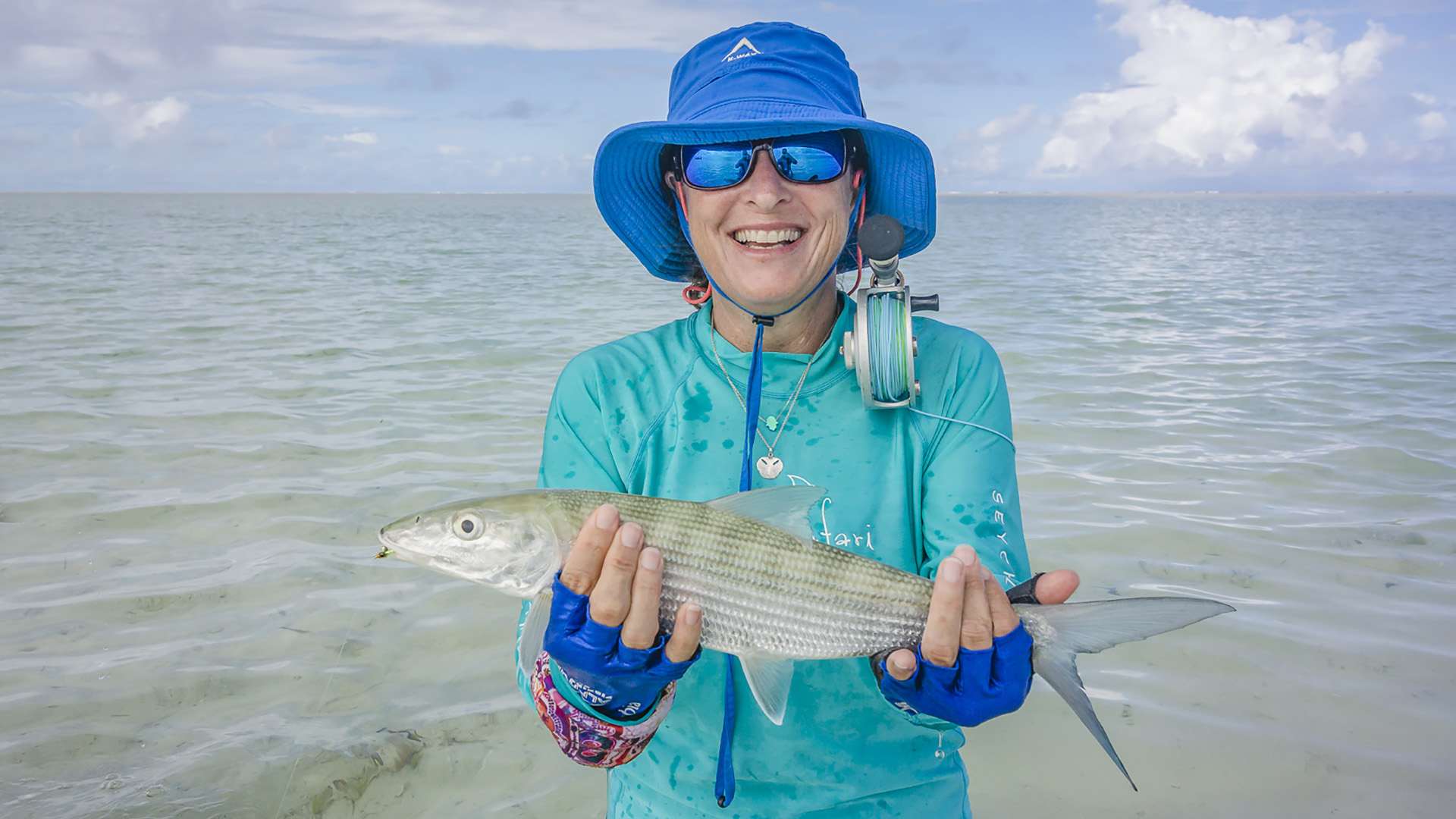 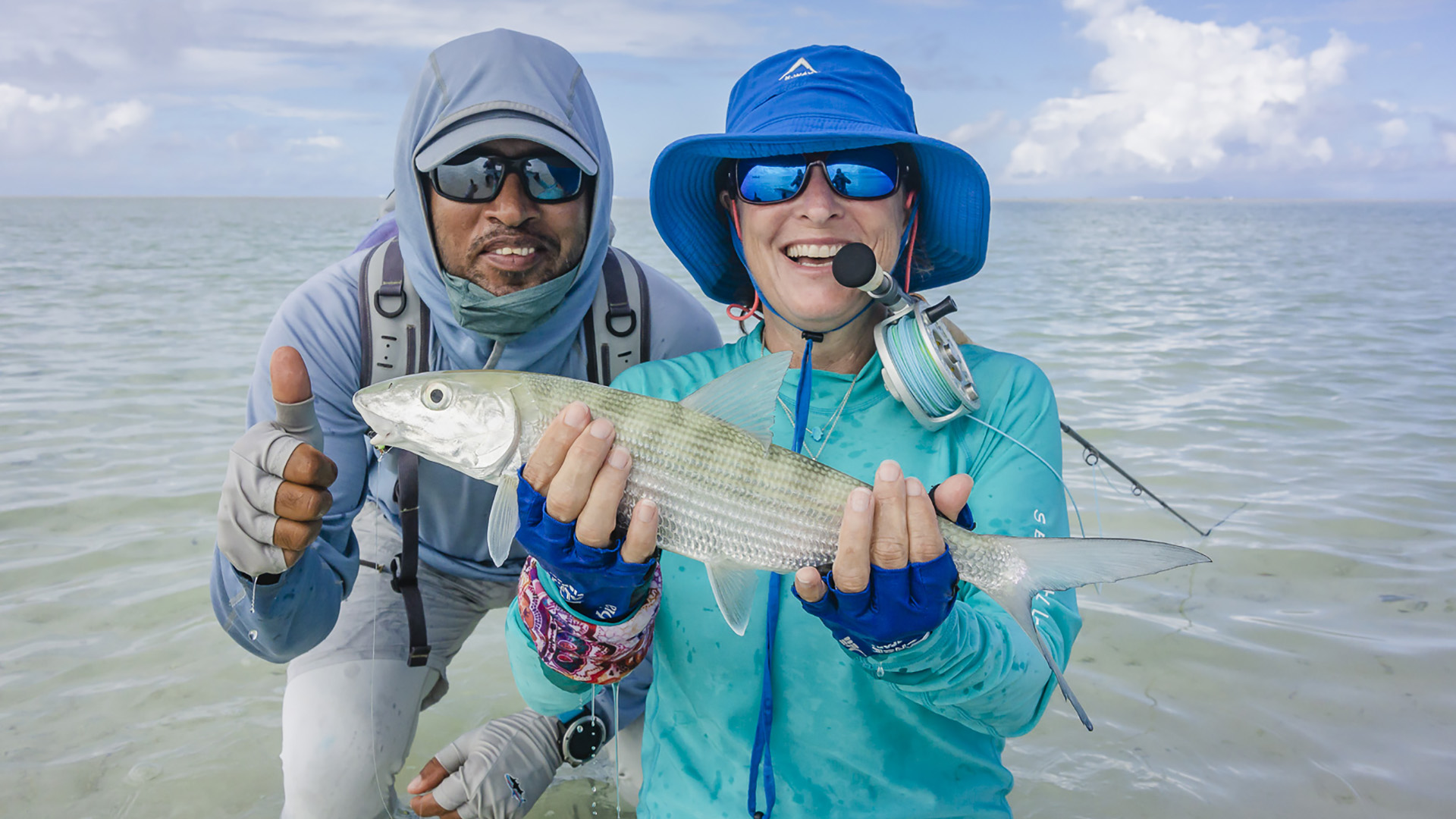 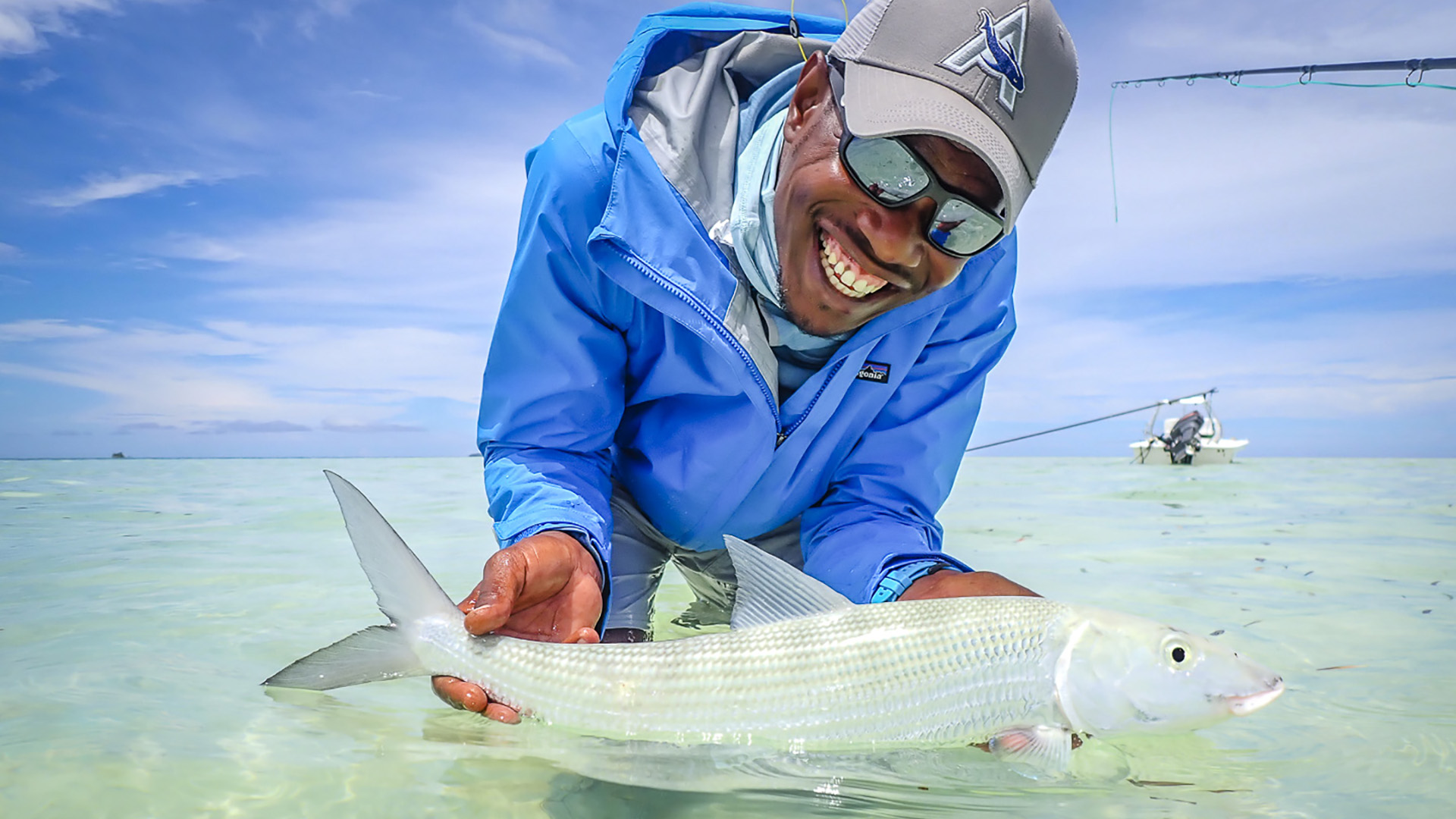 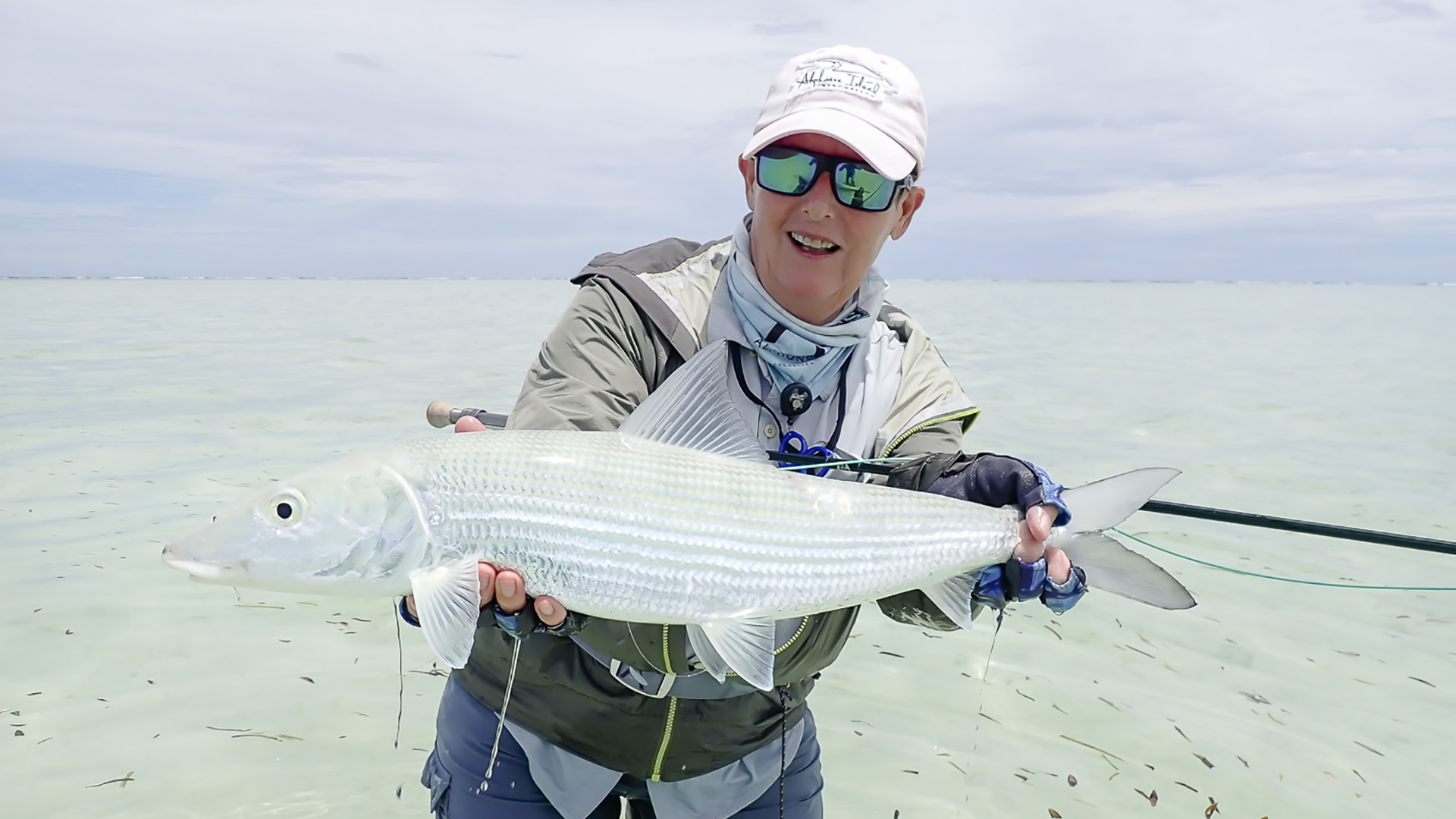