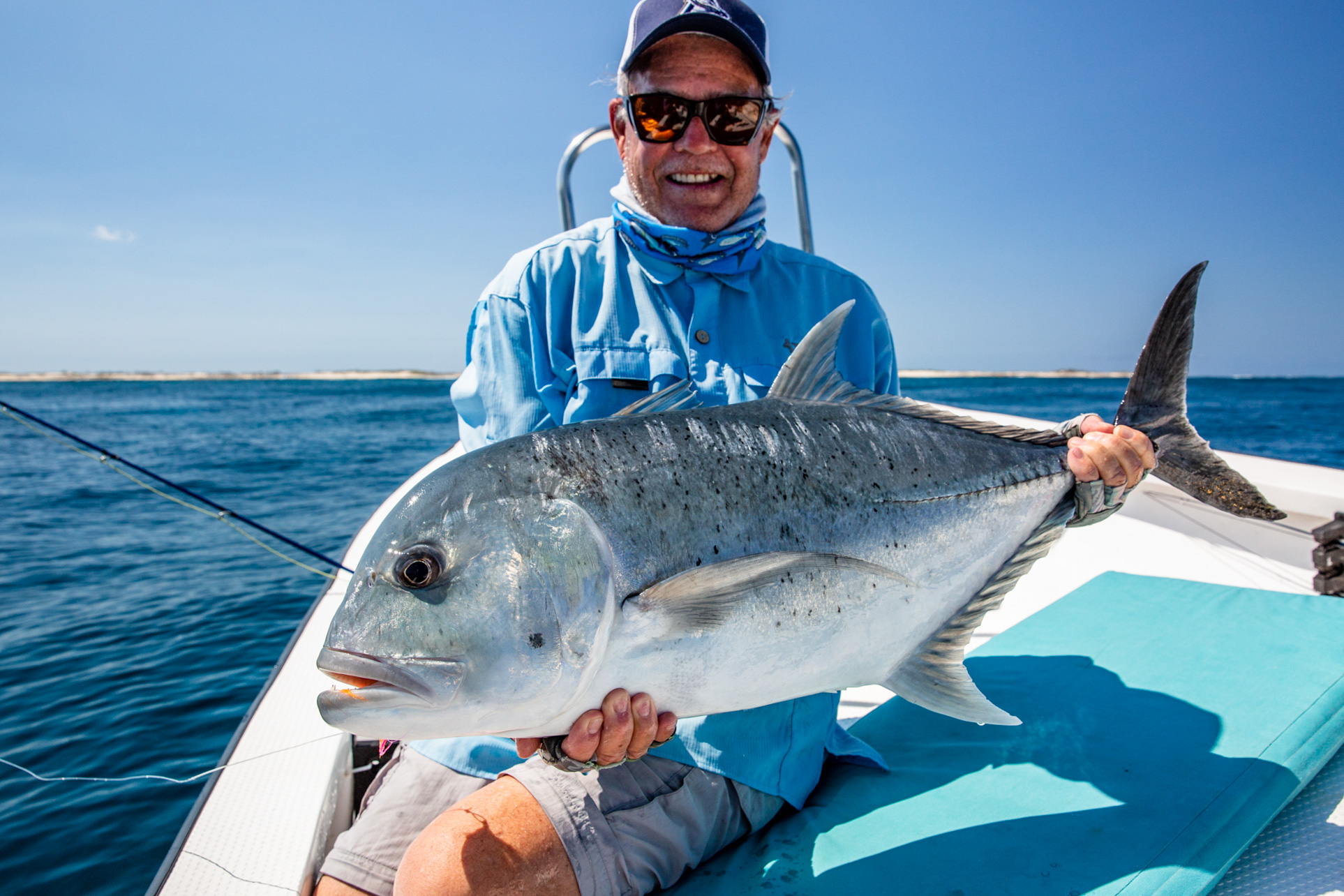 For the start of the week the strong Easterly wind from the previous week persisted but by day three the conditions subsided and gave way to calm balmy conditions. As tides move from springs to neaps this opened new opportunity to fish the eastern side of Astove Atoll on the outside, due to rough conditions this season this area had been unfished.

The delights of Astove were kept to only two guests this week, Tom Hansen and Skip Brittenham, an American duo who are long time fishing partners and friends.

It was Skip who was the first to lay down the gauntlet with a fine 94 cm GT pulled from the shallow waters of Astoves’ lagoon, striking twice he achieved a similar feat the following day catching another great lagoon fish of 93 cm, both fish caught in only two foot of water.

While good numbers of permit and GT’s had been spotted inside the lagoon and in the surf, the calm conditions provided new opportunity to fish the untouched Eastern side of the Atoll, both guides and guests were itching with anticipation to see what fruits the deep blue waters would bear. She did not disappoint, both Tom and Skip landing three GT’s a piece on the first afternoon out.

Sticking to areas where we had seen fish both Tom and Skip built on the success of the previous afternoon, Tom started the day bending into a good-sized Milkfish, and both had returned for lunch with a handful of GT’s. The afternoon is when the fishing really turned on with an epic teasing session, Skip landing 8 GT’s, one close to a meter, and Tom 14 included a huge fish of 120 cm at the end of the day.

Excited to get out, all parties were itching to see if it would progress to round two, with 27 GT’s landed before lunch, it did with a further 11 fish landed after lunch, proving to be a truly epic day with 38 GT’s landed.

The last morning was spent fishing for bones in skinny water around the mouth and the southern side of the lagoon. Skip rounded the trip off with twenty plus along with nine other species.

Both Tom and Skip made the most of their last chance to fish the outside, and despite rougher conditions Tom was able to land a large saddle back grouper and a 72 cm Bluefin. As these neap tides move back towards springs we wait with anticipation to see what the flats will bring next week.

A SUMMARY OF THE WEEKS CATCHES FROM OUR 2 LUCKY ANGLERS! 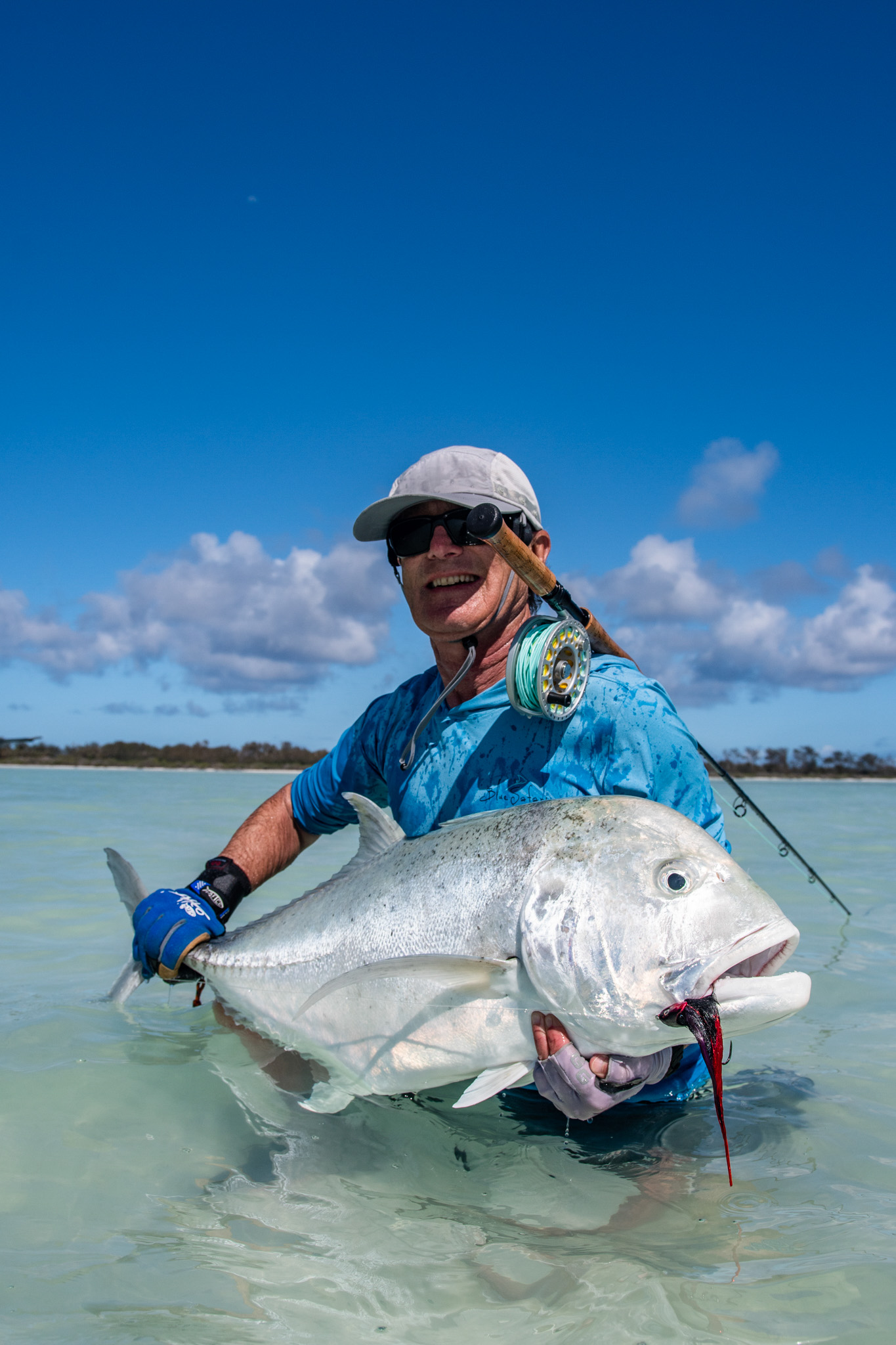 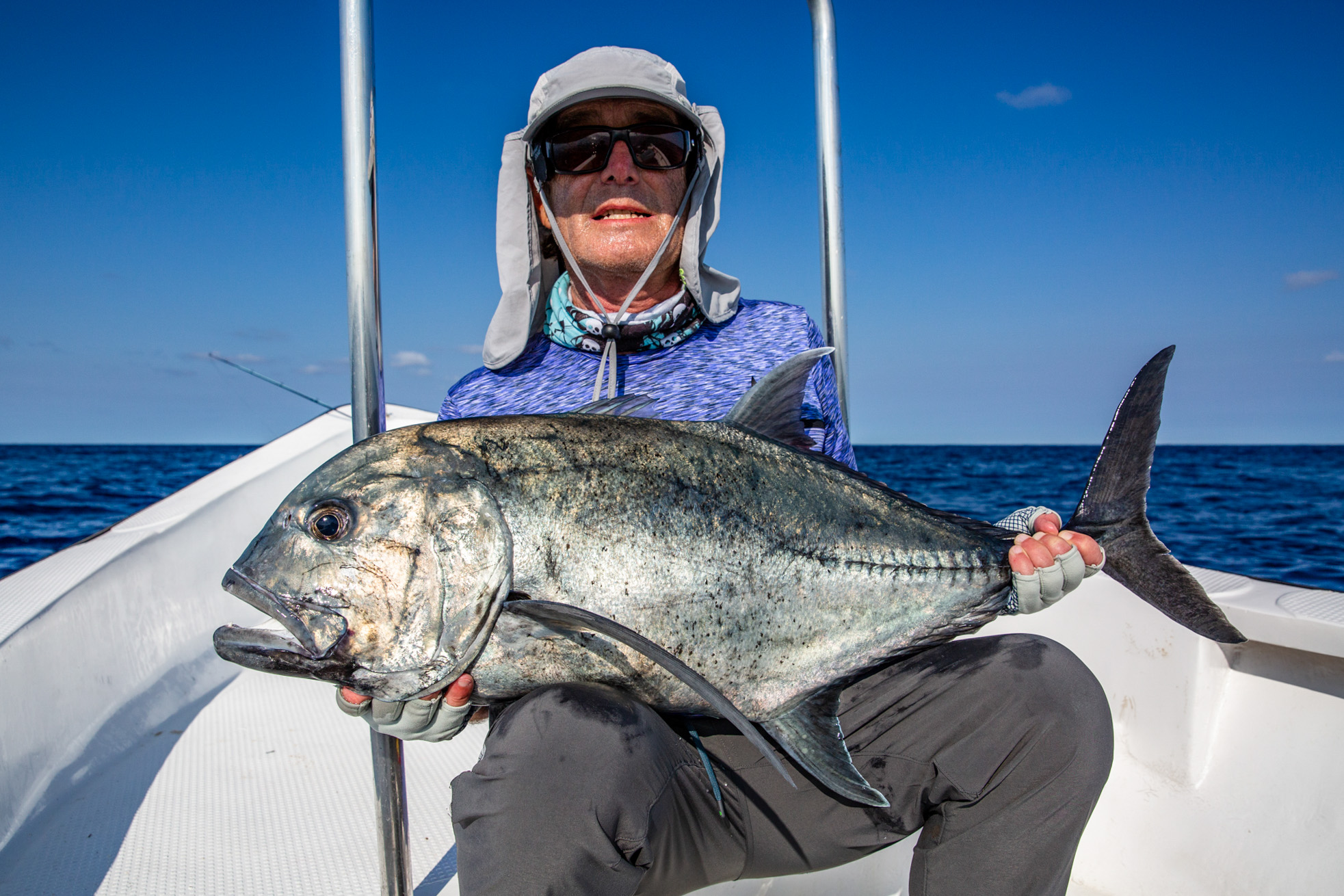 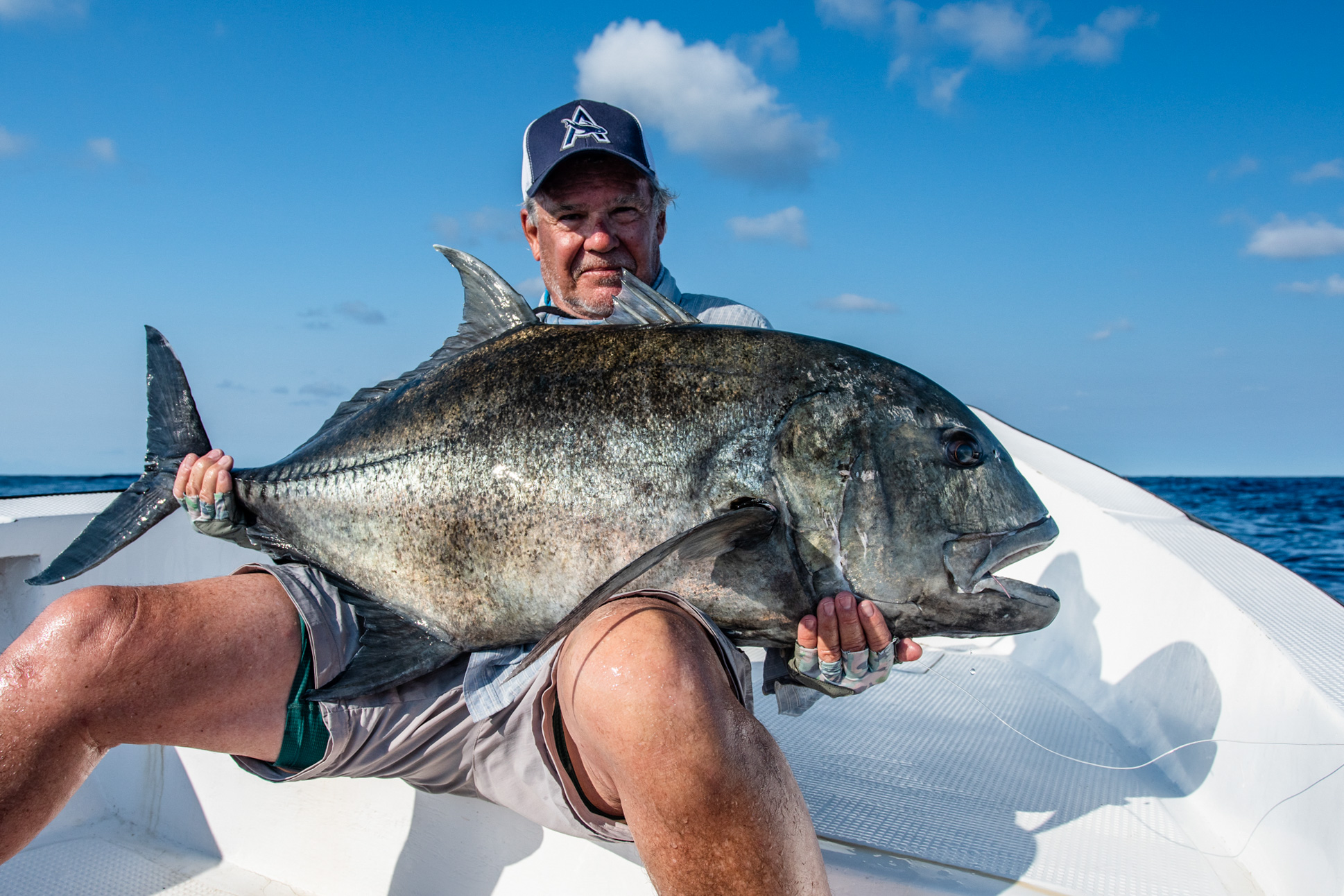 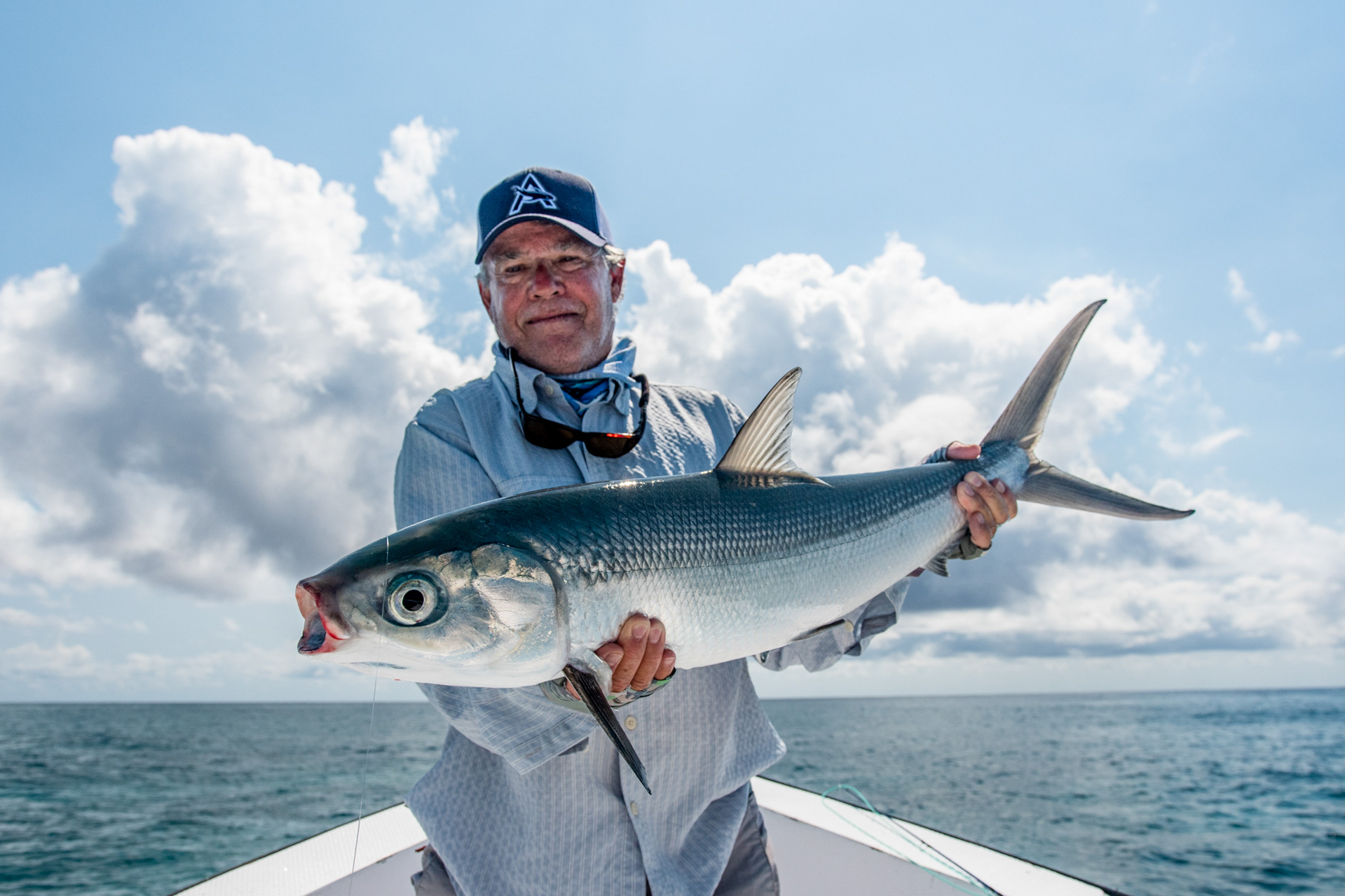