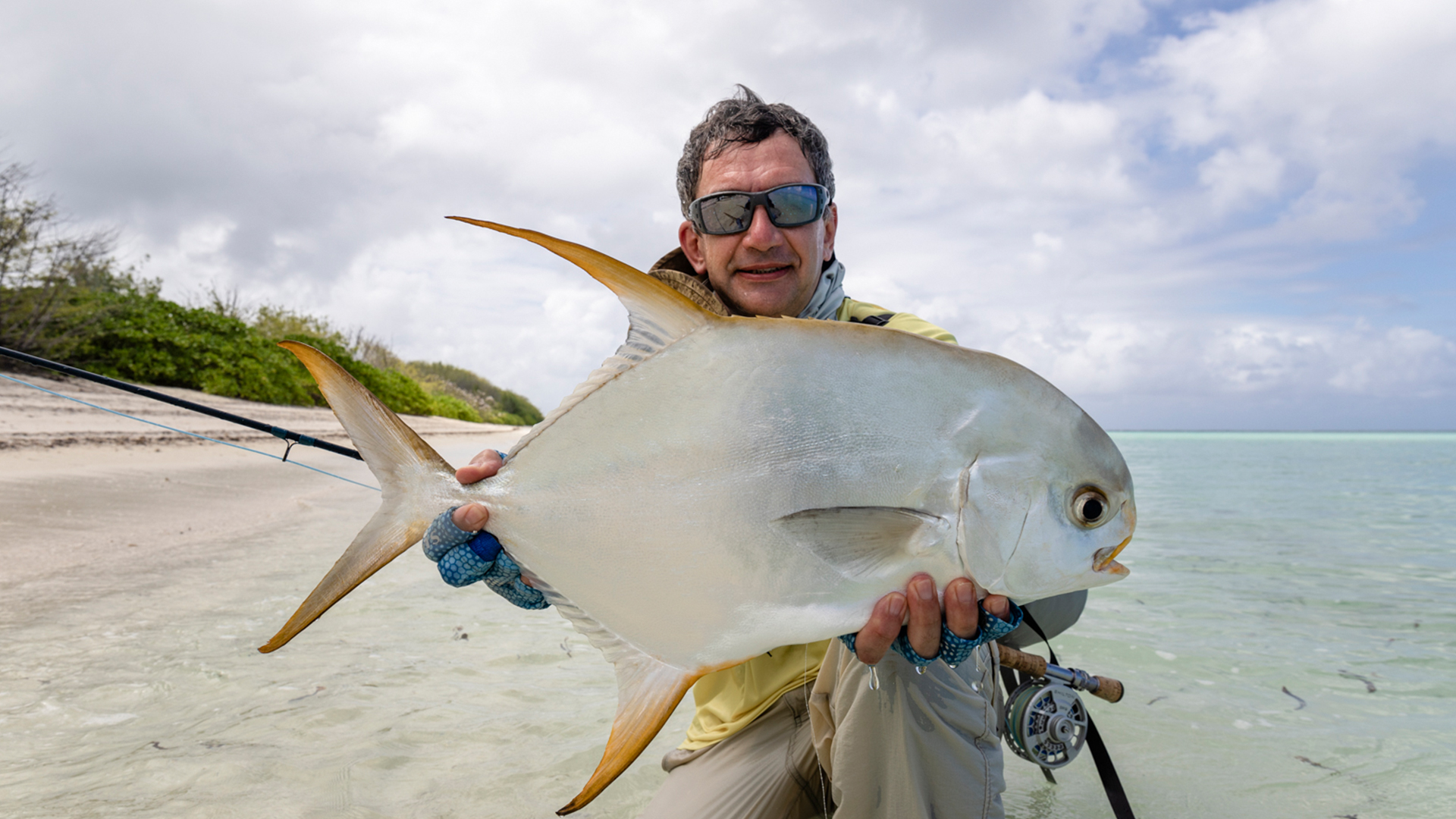 Week five of the season was met with cloudy weather and passing squalls which cleared by midweek. Tides were in the latter-end of the neap cycle and spring tide arrived by the end of the week. The days were predominantly made up of high tides mid-morning, dropping out for the duration of the day. The cloudy conditions presented no challenge to our anglers as the combined group managed to catch all the key species we have on the atoll.

We start the account with Nikita Mishin who is a first-time angler on St. Francois Atoll. Nikita landed our fish of the week, a 60 cm permit, caught on an Alphlexo Crab tied by his guide Cullan Ashby. They were fishing at Back of the Moon, a permit hotspot on the far side of St. Francois Atoll when they came across a group of three cruising fish. A permit is a notch in most fly anglers’ caps and one of this size makes it that much more special. To top it all off Nikita and Cullan were fishing on the white sand quite high up on Highway when they encountered a group of four GTs approaching on the sand. Possibly the dream setup for most, if not all guides, as the expanse of sand gives you a large area to fight the fish without fear of being cut off on coral. This resulted in Nikita landing a beautiful 117 cm GT.

Nikita was not the only one having fun with the GTs. Mark Turley was fishing with Stuart Webb at Bus Stop on Bijoutier Island at the beginning of the push. Clean cold water was pushing hard on the flats when three fish came swimming high on the water towards the cut. Mark laid out a great shot and the fish charged. The first fish ate but no purchase, second fish ate and still no purchase (at this you are tempted to check if your fly is still attached to your leader) but Mark kept stripping. The third fish at the fly right at their feet and put Mark on to the reel almost instantly. He pulled hard but there was no stopping that fish and despite his best efforts there was no stopping the fish from cutting him off on a coral head in the surf. Fortunately, Mark persisted and in the late afternoon, it all came together. Mark and Stu were doing a drift in the deeper water when they spotted a big GT riding high. Mark made a shot with the popper and that caught the attention of the fish. It ate on the first strip and he did well to the fish in the nasty coral. After a 15-minute tussle it was landed, tagged and after a couple of photos, released.

Ian Hodge and Ty Pollock rounded off the week by taking a break from the flats and heading out into the blue in search of sailfish and wahoo. The luck fell on Ian’s side as he managed to bring a sailfish to the boat. Ty sadly had two fish spit the fly near the boat and another that shook it off with electric jumps. A total of about 10 fish were raised in the session and Ian’s luck proved itself further with him bringing a wahoo to the boat.

Needless to say, Nikita came away with the angler of the week award, although it was a hotly contested position.

The atoll showed what it had to offer this week with permit, sailfish, GTs, moustache & yellowmargin triggerfish, milkfish and bonefish all being caught by this group. 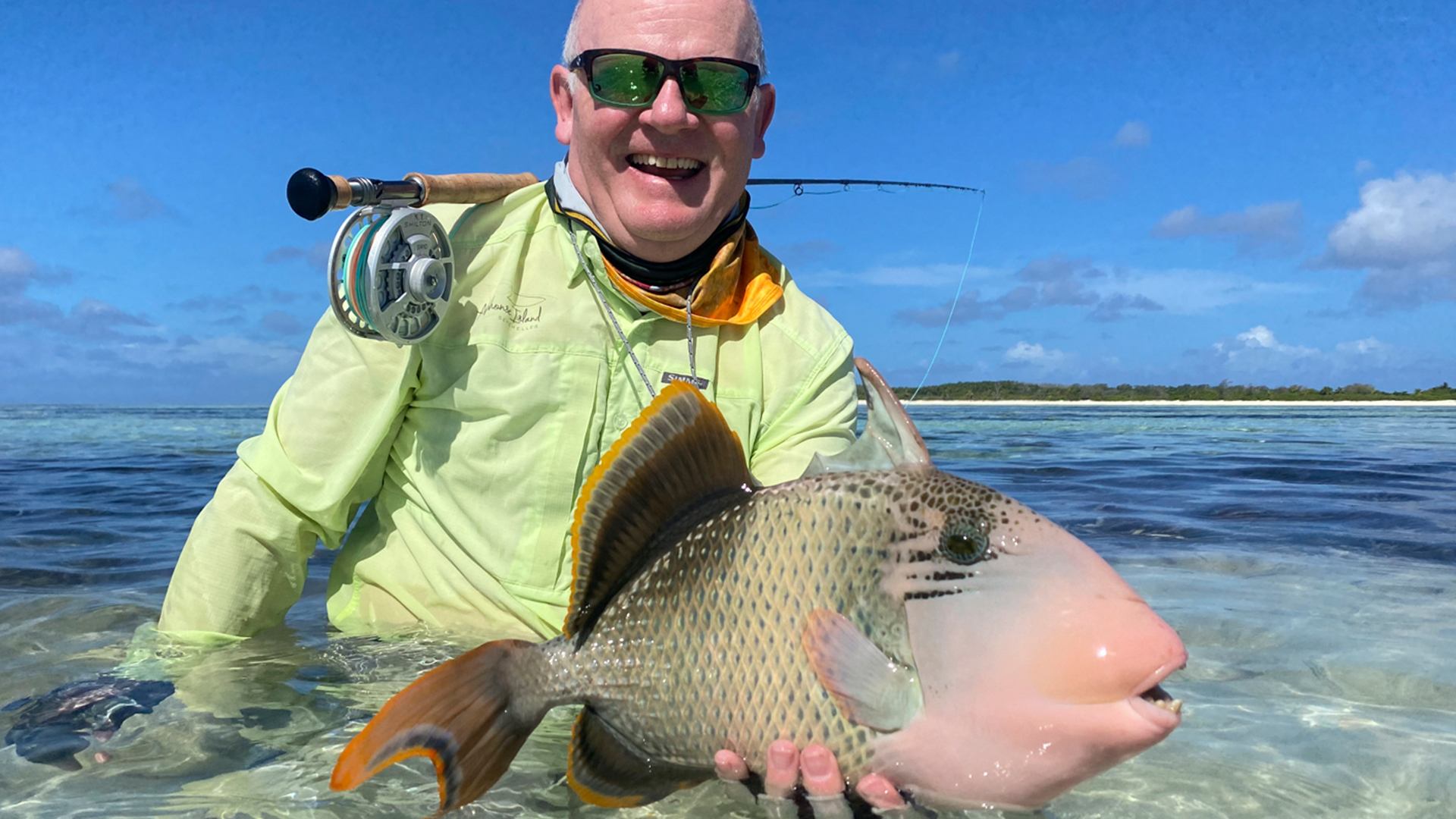 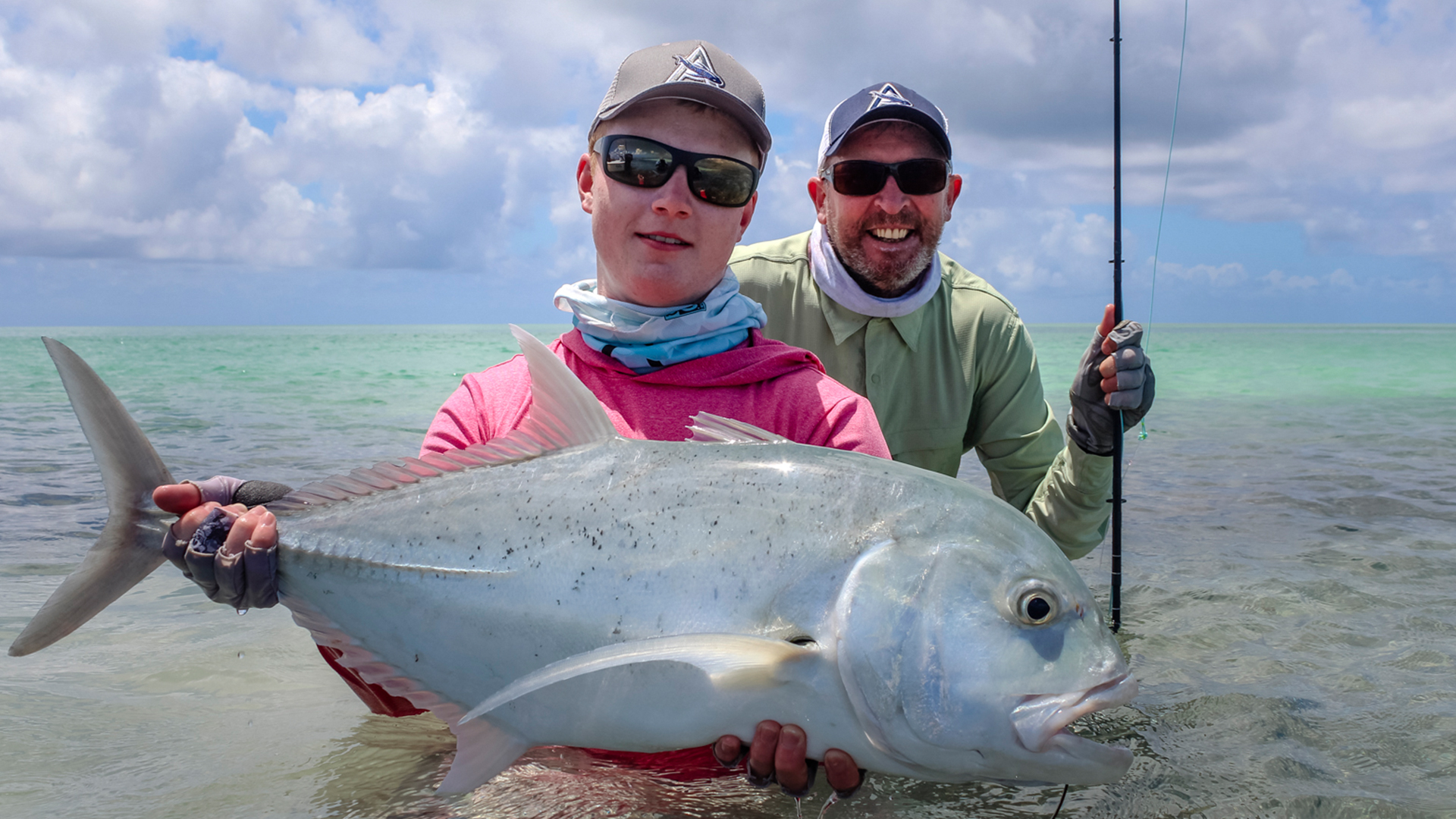 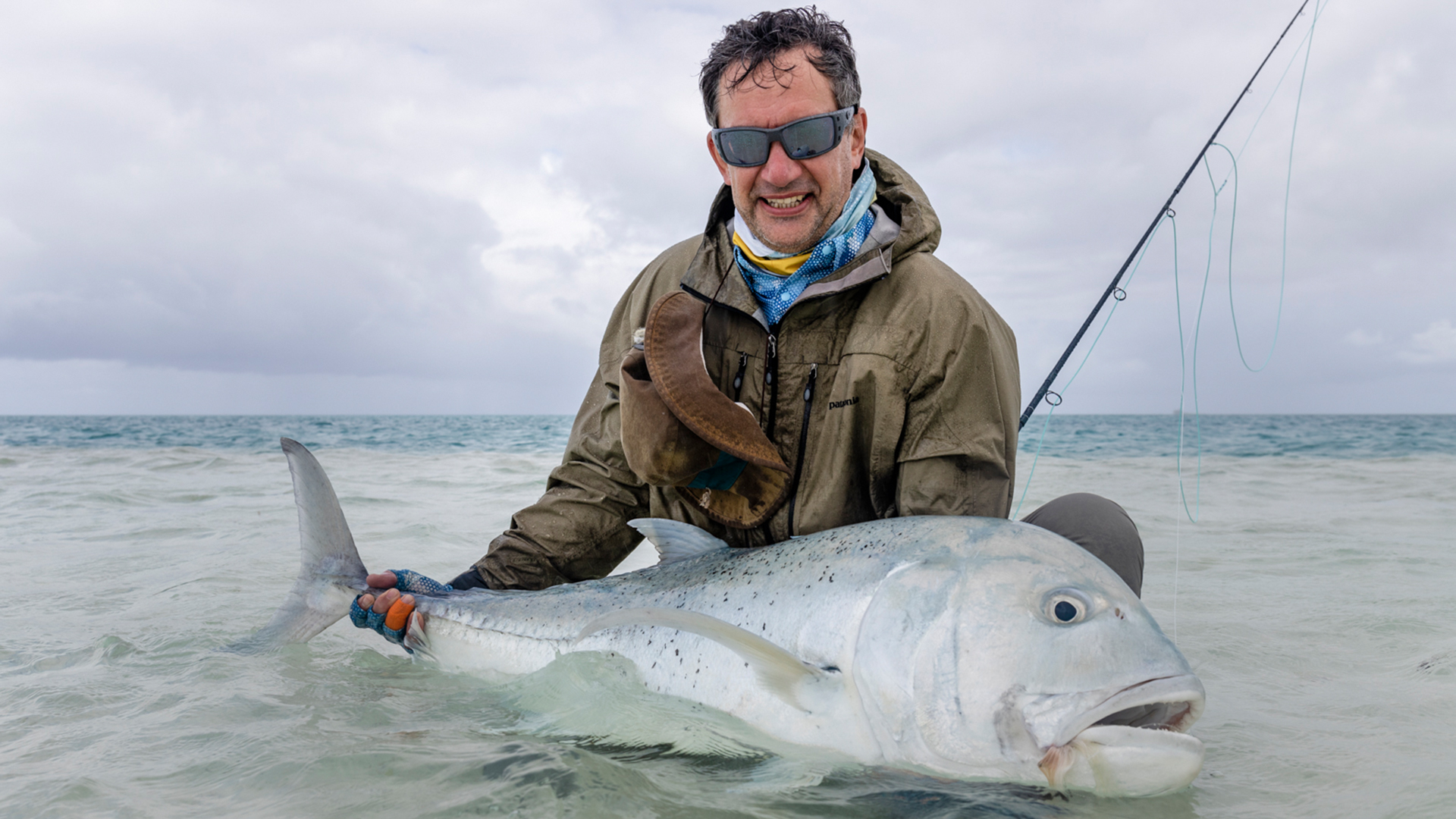 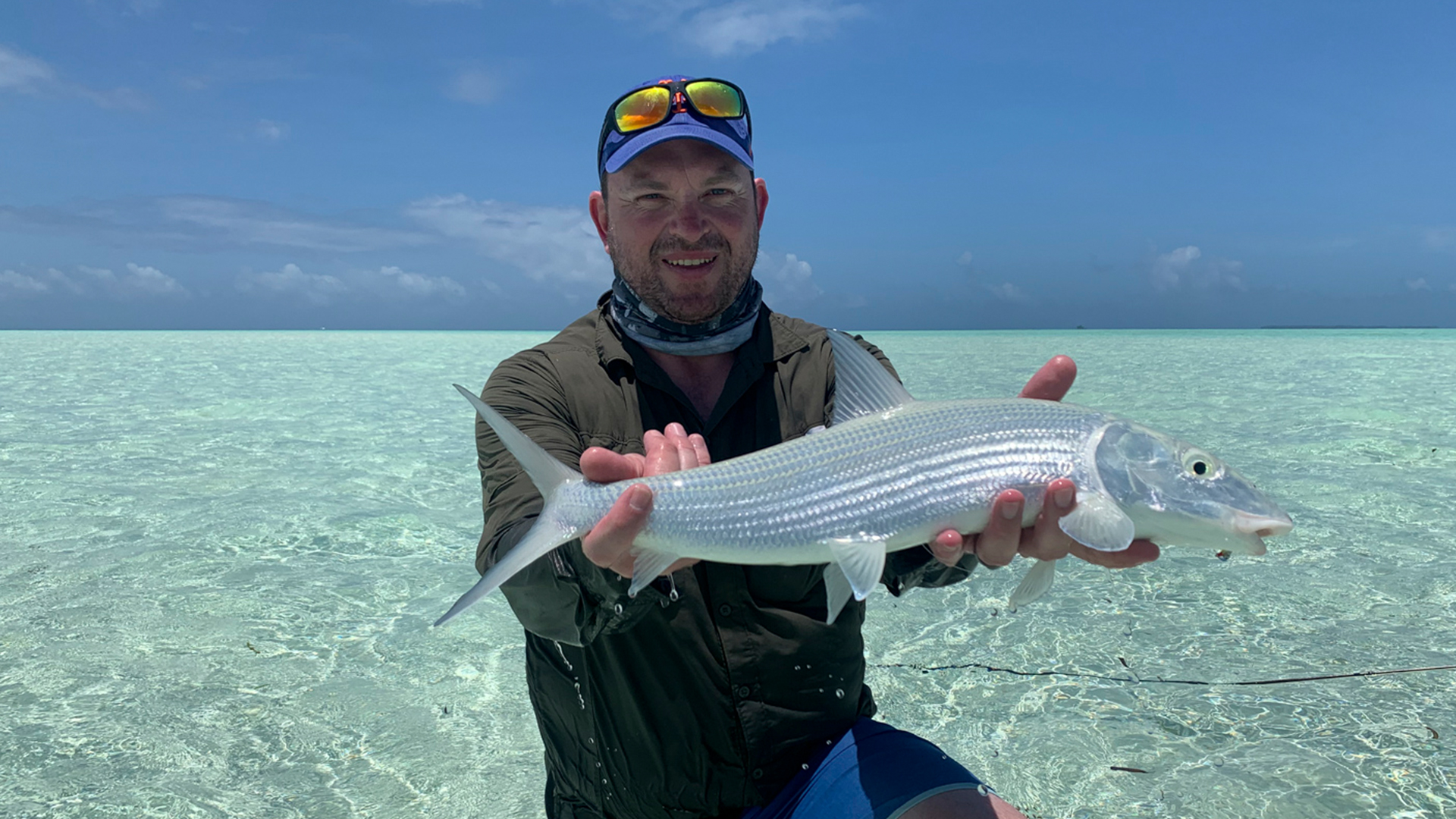 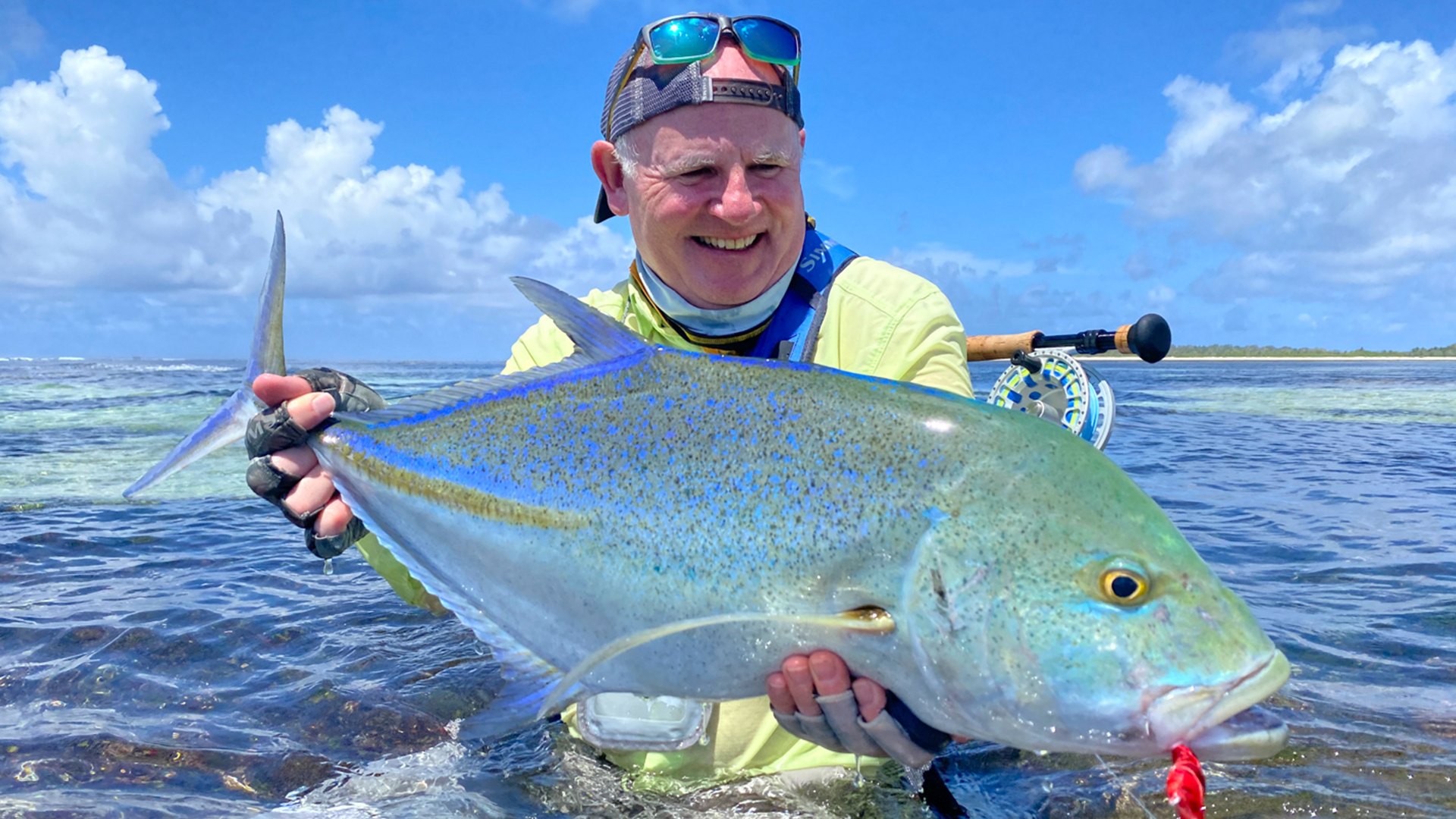 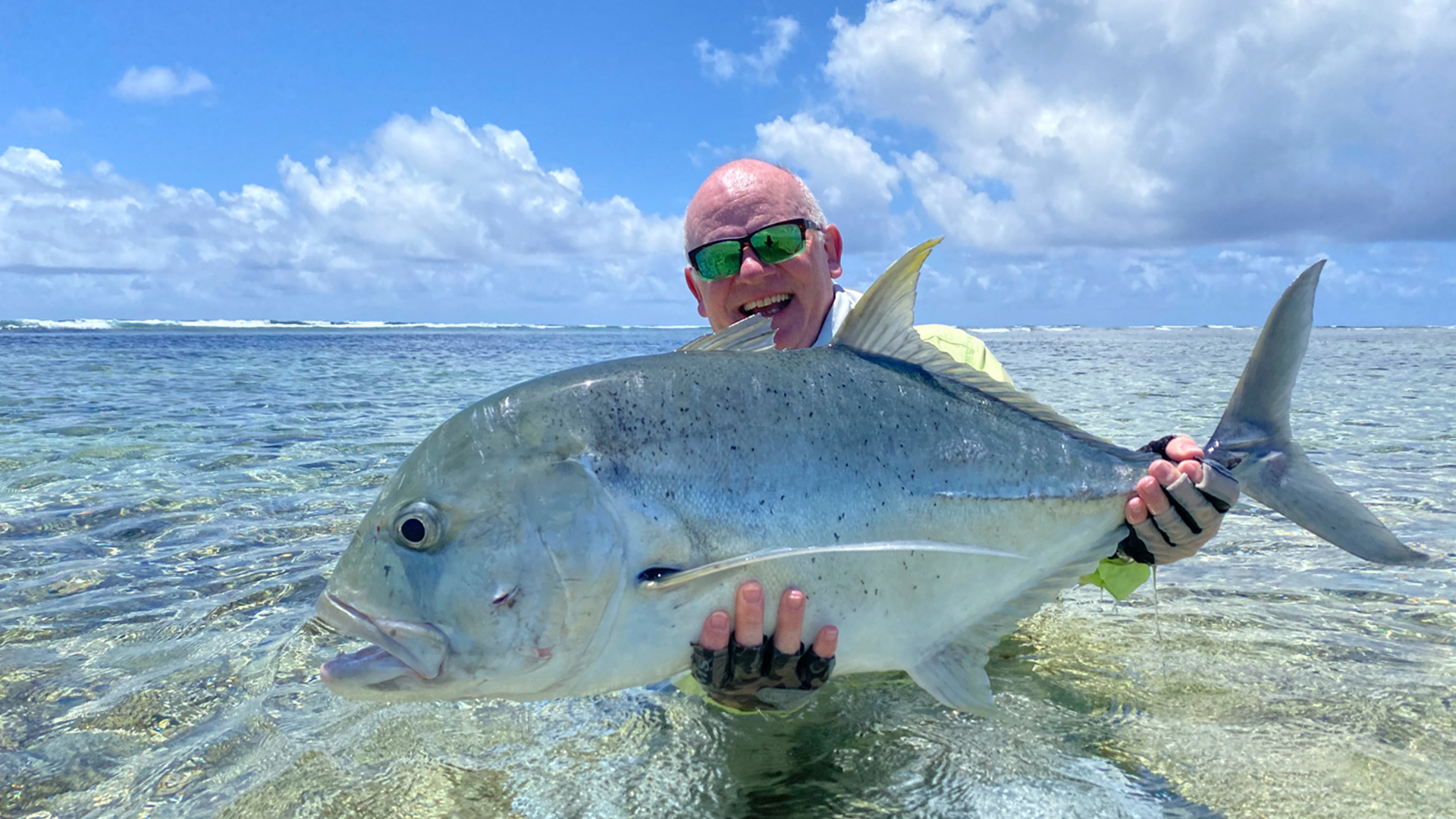 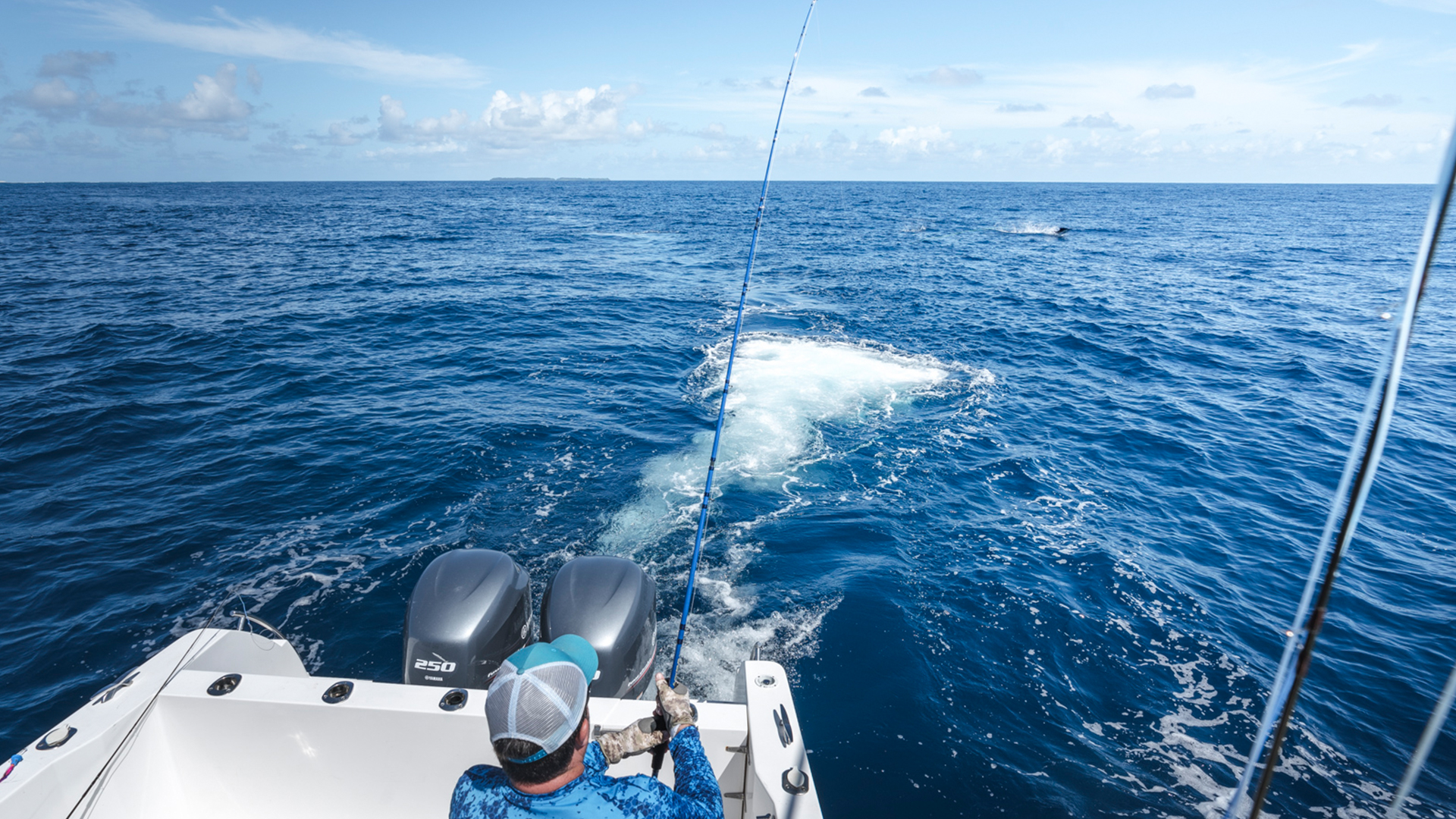 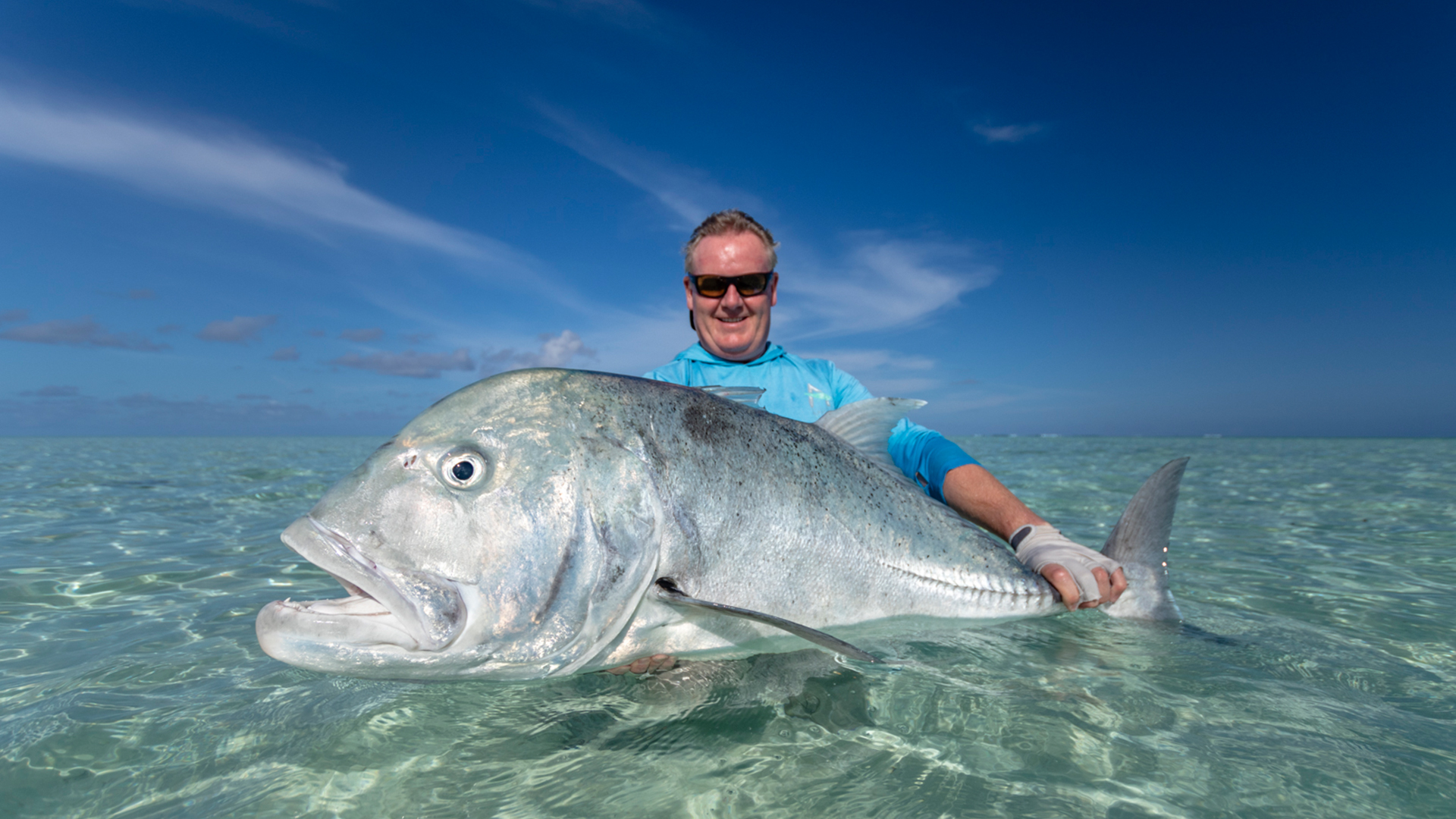 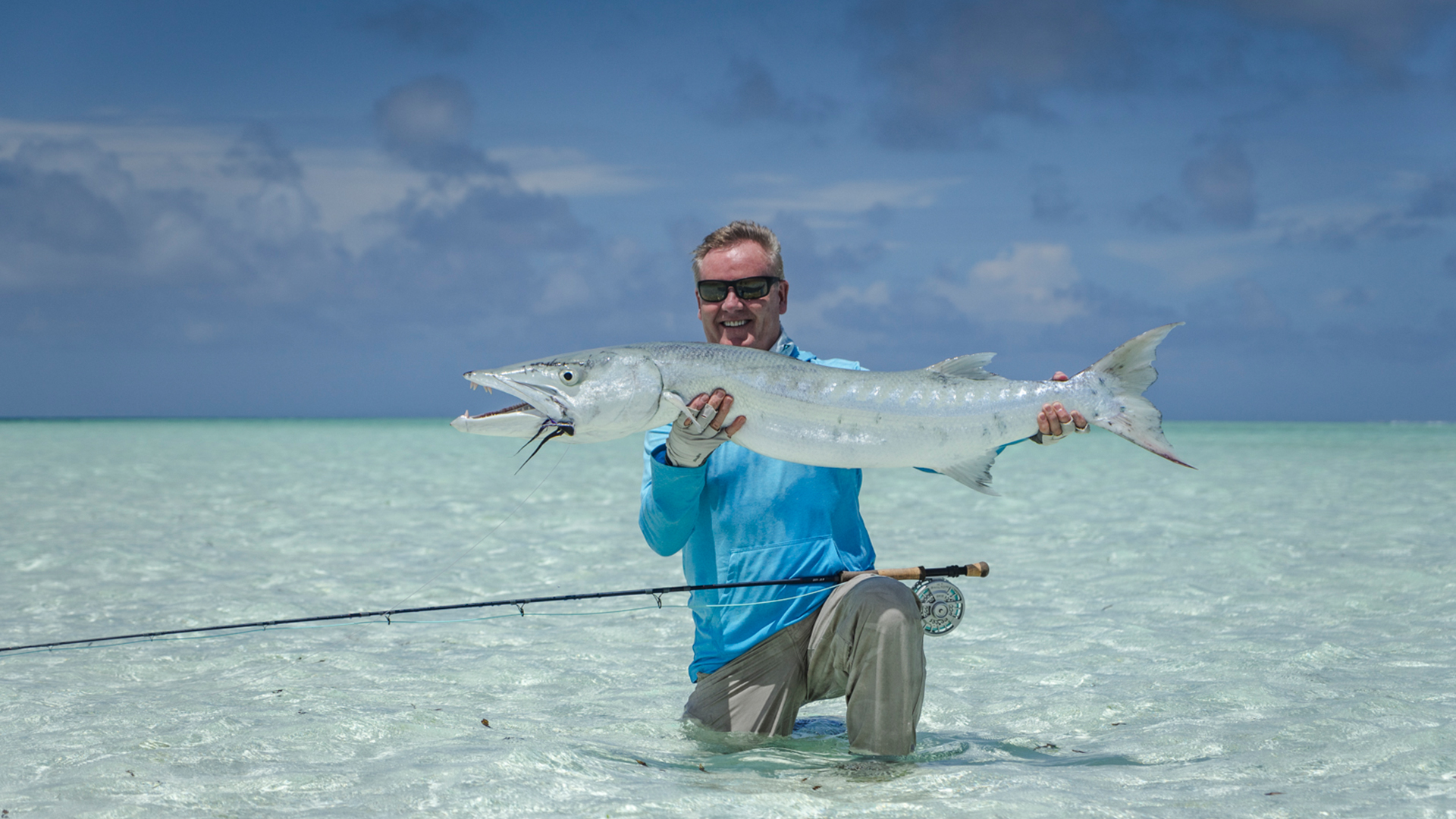