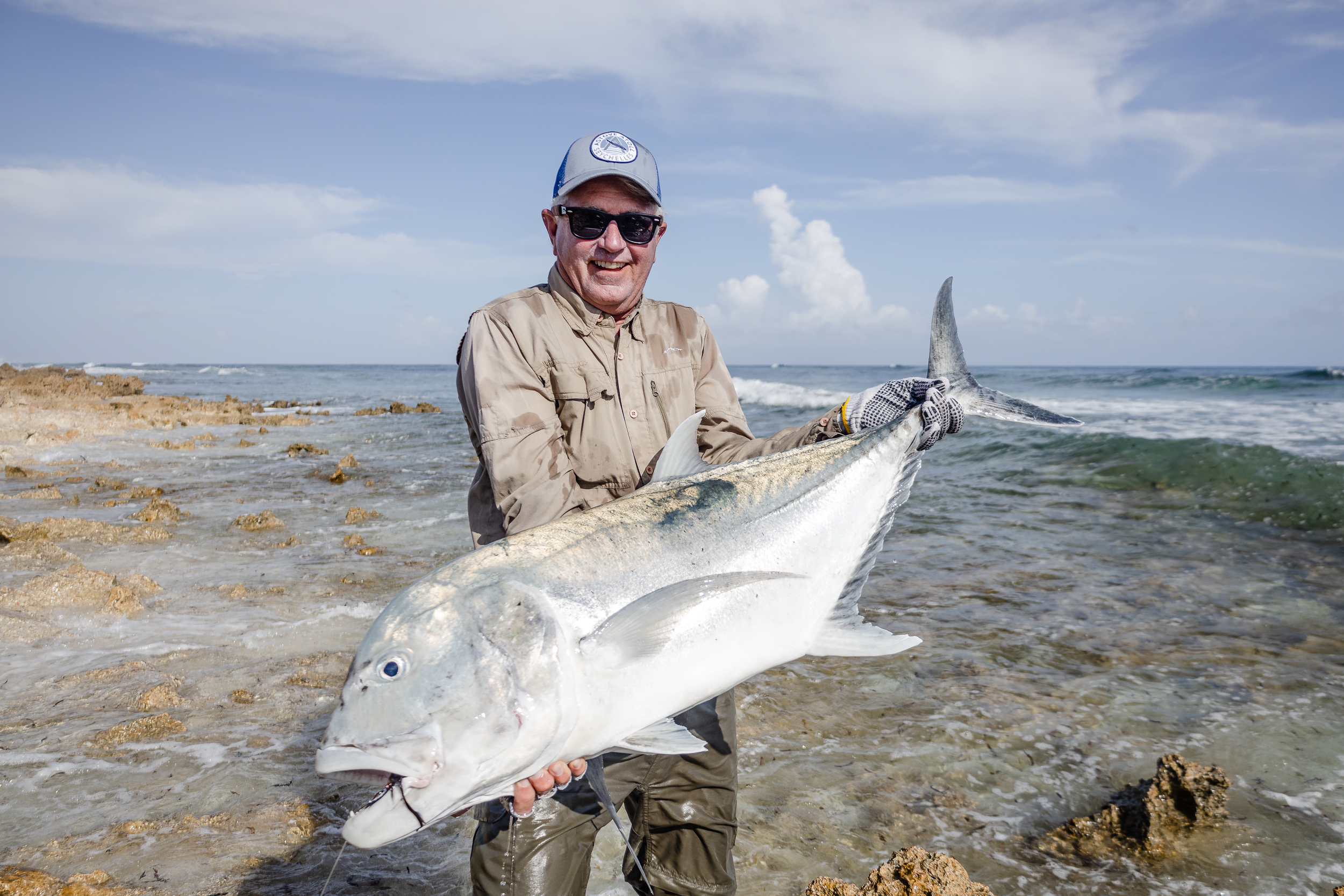 We spent time on the skiffs and fished off the rocks when heading into neap tides. Some passing by clouds and showers didn’t get in the way of catching some fish of a lifetime.

Rob decided to start his week off by catching a permit in the lagoon while Chris and Cash got stuck into some bonefish.

After success in the lagoon the previous day, Rob and Mark ventured back to take a few more shots at permit and collect some bonefish. Chris and Cash tried their hardest with the windy conditions but unfortunately just couldn’t hook up with the permit, they kept their reels warm on a couple of bonefish.

Permit happy, for the time being, Mark and Rob shifted their focus and came across a big shoal of hungry GTs on the flats. Chaos all around meant the guides were working hard in the short window of a feeding frenzy, Mark landed himself two beautiful geets and Rob managed three. All the fish averaged around a healthy 75 cm. In between the GT craze, Cash was making it happen on the flats and landed himself a nice Barracuda.

Chris and Cash went on the boat for a blue water adventure, starting with dredging. Chris quickly learnt that he needed to hold on tight, and managed to catch a few grouper and a 80 cm GT on the dredge. Cash also managed to bring up a few grouper and a good number of the bigger bluefin. Wild popping off the drop-off, Chris got another three GTs and Cash managed to get two, the biggest of which was 88 cm. Mark and Rob joined in the dredging and also managed to get some grouper species. On a quick lagoon mission for the afternoon, Rob landed another permit to add to his growing badge collection, and he finished the day off with GT to complete his flats slam.

Still hungry for the permit they couldn’t quite land on the first day, Chris and Cash set out again, managing to land a permit each and completing a double flats slam with bonefish and a GT each, special moments for father and son. Rob and Mark got set up on the rocks, not long into the morning a good fish passed by and Mark made the cast of his life. His cast connected to a 108 cm GT that landed in foul rocks, later in the afternoon Mark and Rob landed another GT each for the day on a blue water excursion.

Chris and Cash added to their bluefin count in the morning whilst waiting for passing by GT off the rocks, in the afternoon they did some species bashing off the wall, catching a few small grouper, bluefin and a long tooth job fish. Rob decided to end off by getting himself another permit, bringing his tally to three for the week. 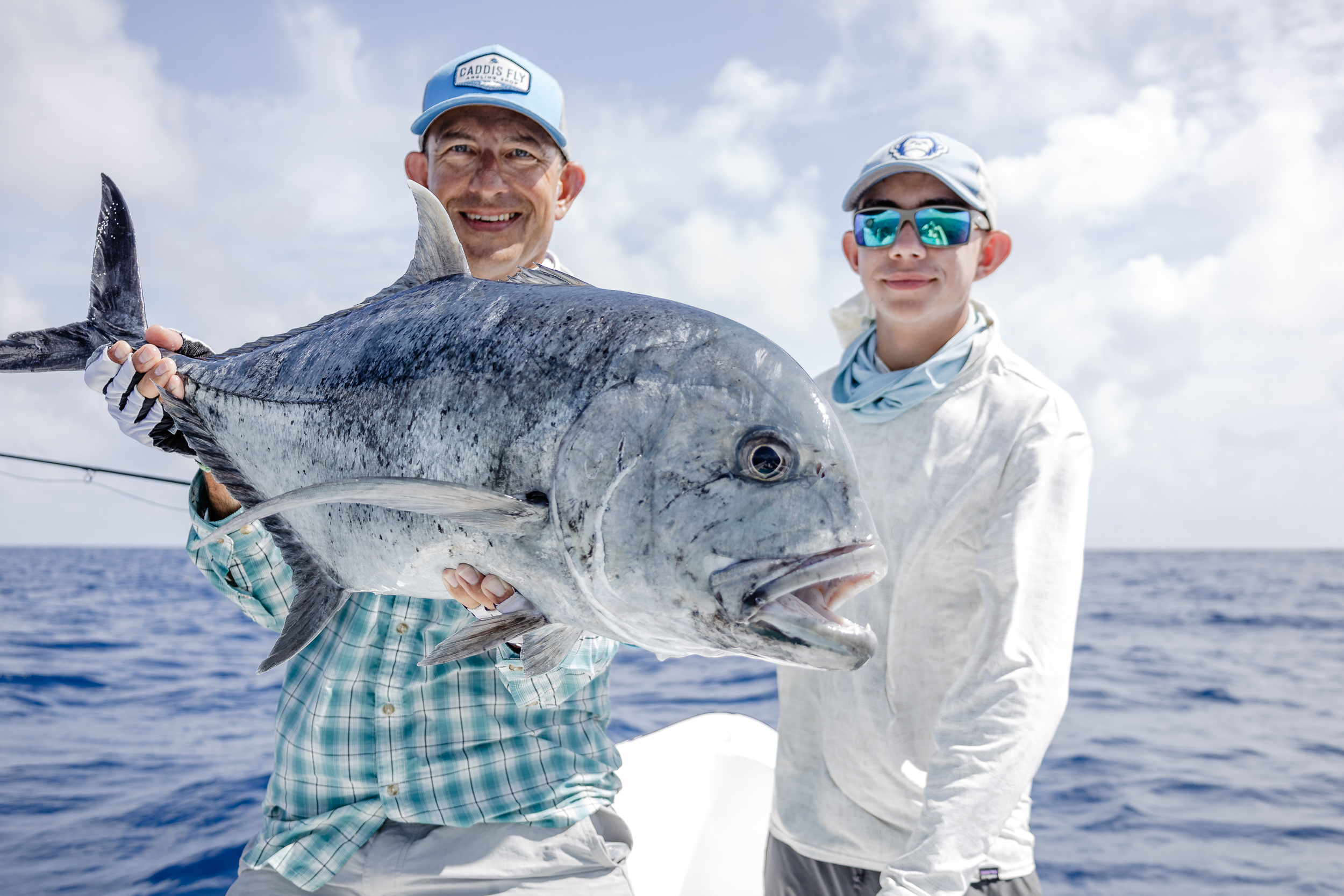 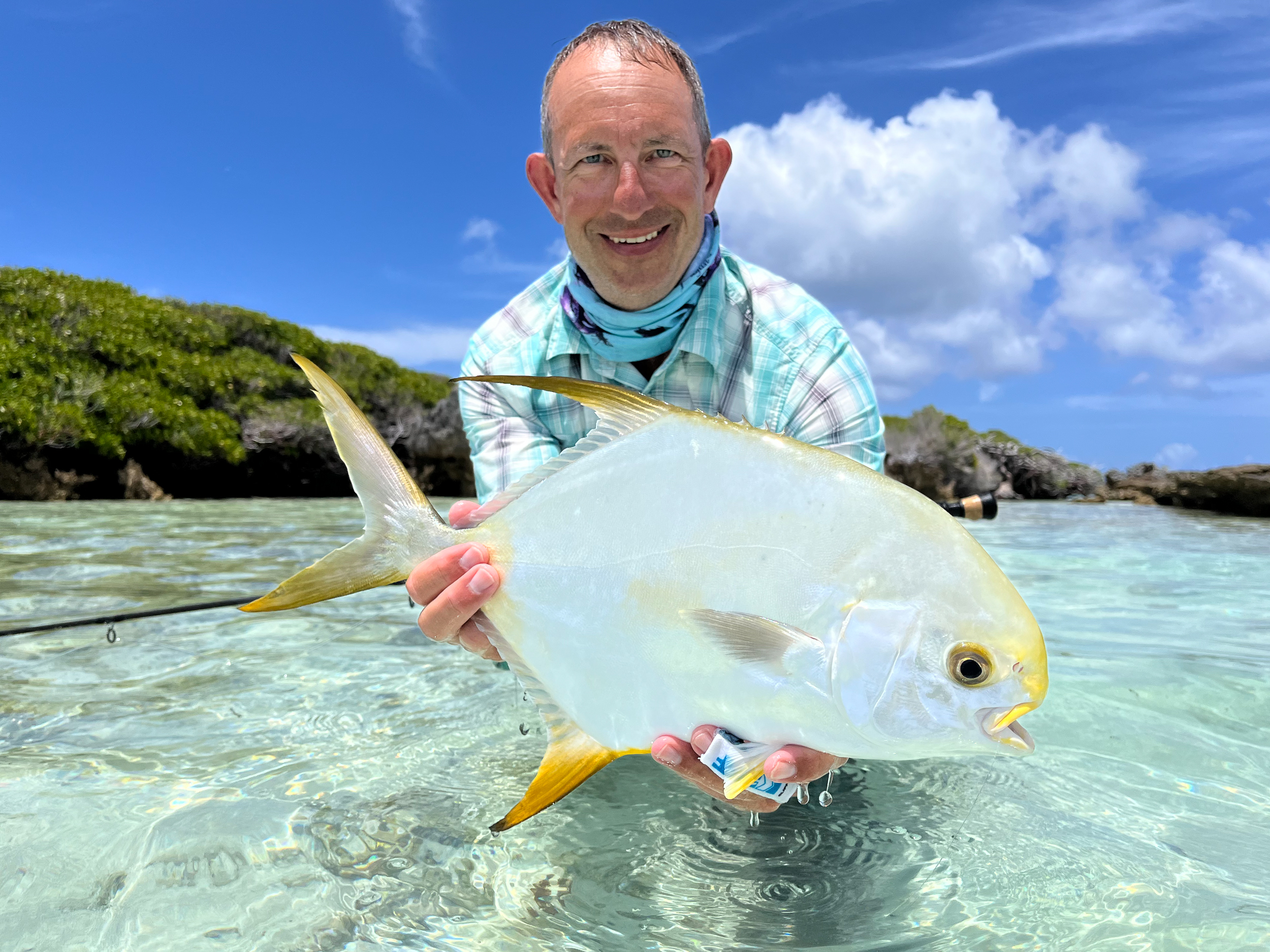 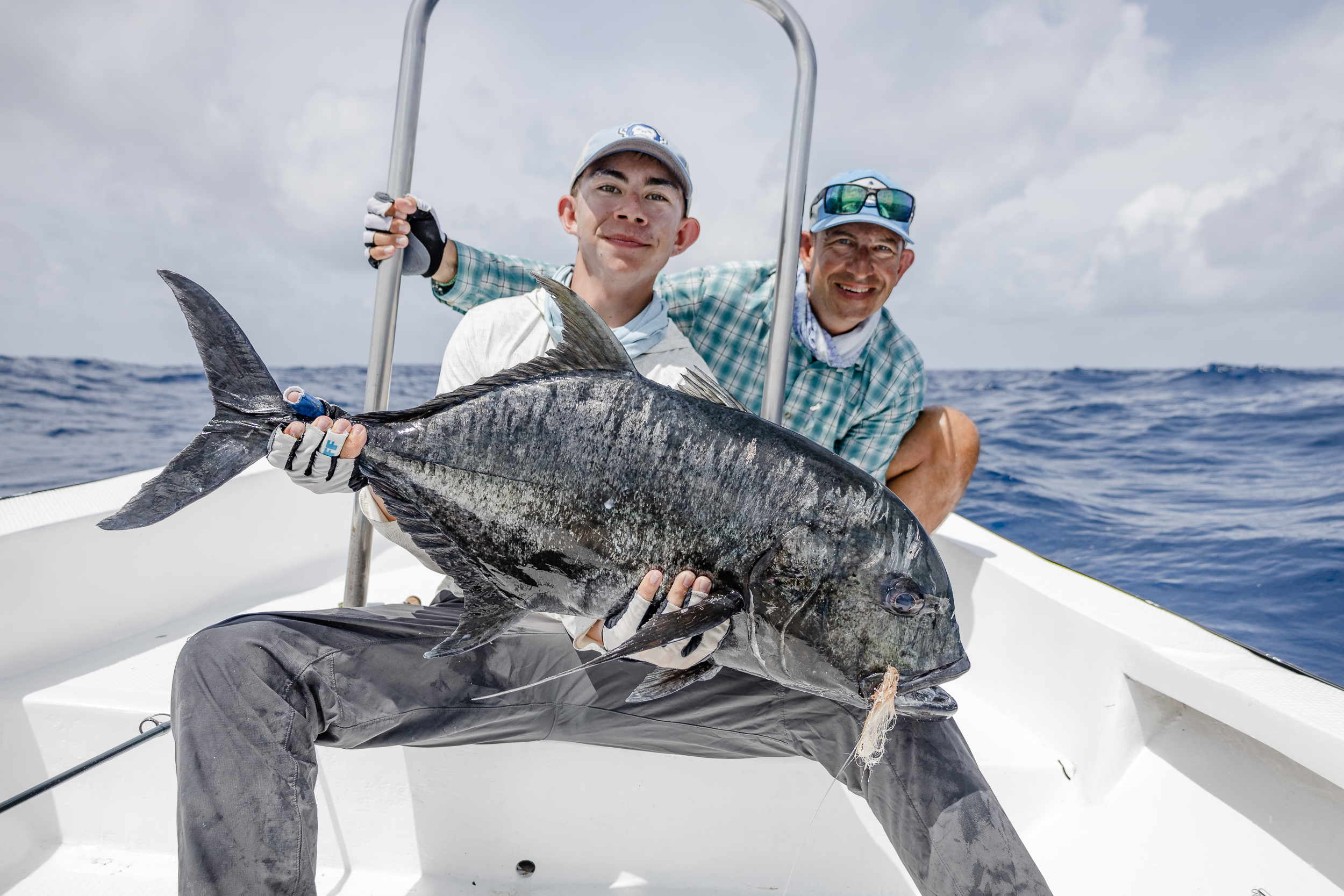 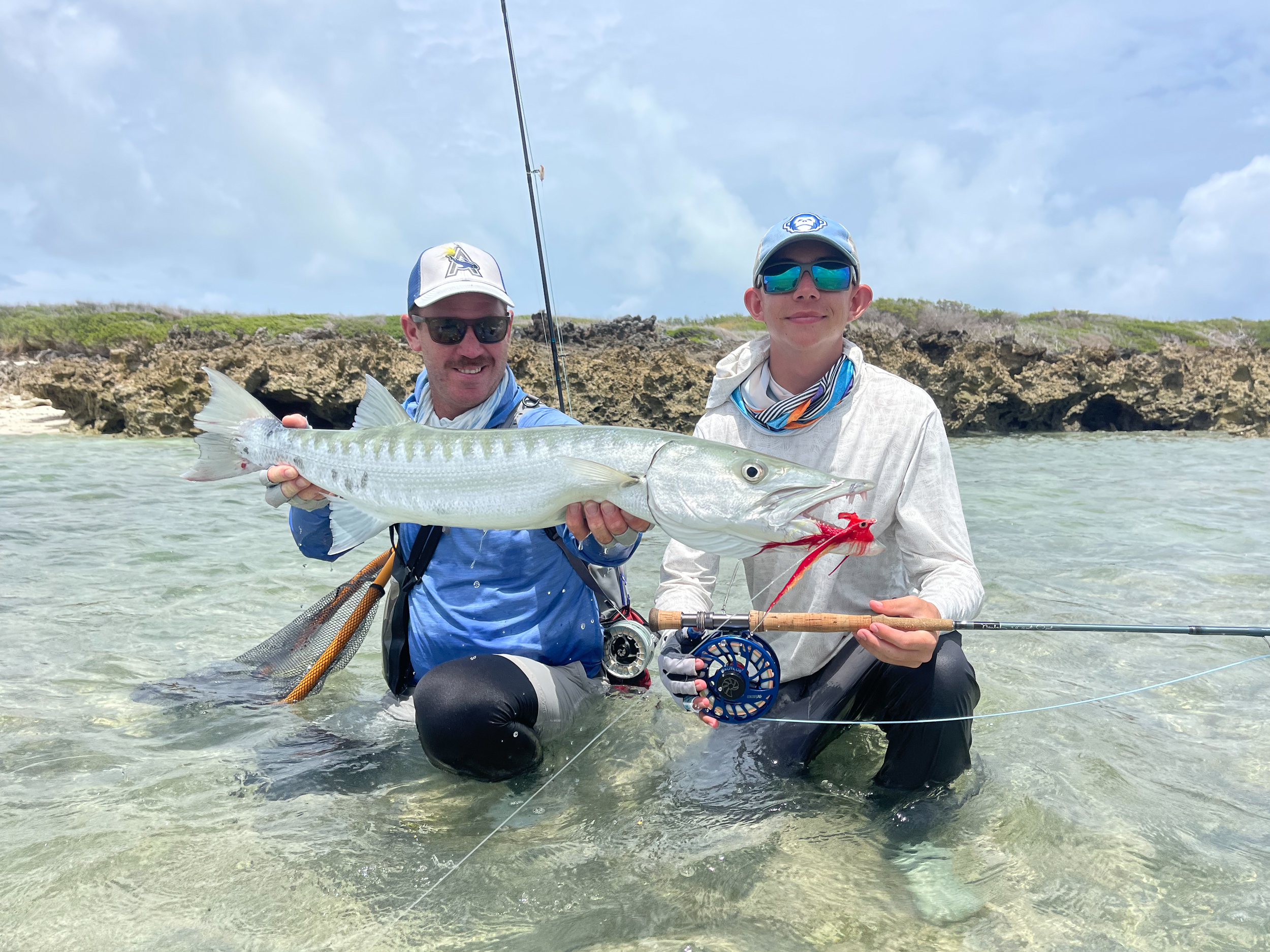